Come Learn about Beekeeping on May 19th! 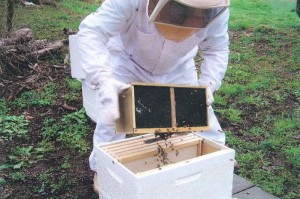 This months Grow Annapolis Network Meeting will be focused on beekeeping! Join us on May 19th, at the West Street Library in Annapolis, where we will be joined by local beekeeper Joe Brotherton of Mr. B’s Apiaries. The meeting will run from 2-3:30 pm.

Here’s a little background on our speaker:

I was first introduce to Beekeeping in 1995, when while doing volunteer work I was asked to take over the Honey Display at the Anne Arundel County Fair.

It was during the Fair that I met some really nice Beekeepers as well as the State Apiary Inspector who invited me out to their Bee Club to learn more about Beekeeping.

After attending several meetings I became hooked and the following year talked my wife into keeping a hive at our house. The following year it was a second hive. Three years later it was 25 hives!

At one time my honeybees provided pollination for about 10 different farms in Anne Arundel County.

After a devastating loss of colonies in 2006, I moved my Apiaries to the Naval Academy Dairy Farm in Gambrills, where my honeybees currently reside.

I specialize in Beeswax candle making and own over 80 different molds. Many of my candles have won awards.

In 2002 Mr. B’s Apiaries was formed and has become one of the most successful Beeswax Candle Makers in the east!

Mr. B has been a permanent fixture at the Anne Arundel County Farmers Market at Riva Road for the past 14 years.

Looking forward to seeing everyone there! Be sure to tell your friends!